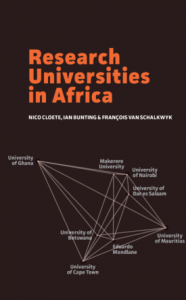 Written by: Akiiki Babyesiza
Higher education and research in Africa have long been marginalized in international development cooperation. This only changed slightly with policy reports of the World Bank and UNESCO in the 2000s that placed higher education and particularly research at the heart of knowledge-based development and poverty reduction.

A network on higher education research

Universities as core engines of development

The main authors of this publication, Nico Cloete, Ian Bunting and François van Schalkwyk, who are preeminent scholars and experts in the field of higher education studies in Africa make the case that scientific knowledge production should be at the core of the university’s role in development and that African universities should be viewed as engines of development instead of service providers or instruments of development, which are so often the models used by international donor agencies and African governments. Competing models, goals for and expectations of universities form the common theme of the book.

The first chapter introduces the historical context of higher education development in Africa and the conceptual and historical trajectory of the Herana project. Data was generated through international, national and institutional documents, institutional academic input and output data and interviews. In Chapter 2, which focuses on the research performance of the eight universities, the choice and collection of data and the development of target indicators are explained. Here the researchers offer an indicator-based operationalisation of research productivity and subsequently a typology of the universities from research-aspirational to research-led university. In the following chapters, the authors explain the different hurdles for the universities on their way to become research-led. There is a divergence of expectations and conceptual models with regard to the role of universities in development between international donors, national policy-makers as well as university leadership and academic staff which is shown in the inconsistencies between donor programmes, national frameworks and strategic plans respectively (Chapter 3). Chapter 4 focuses on the tension between teaching, research and community service to the detriment of the research function, due to the heavy focus on undergraduate teaching and consultancy.

The observed tension is also connected to the current incentive structure on the institutional level which favors teaching, while sufficient public funding for research is lacking. This gives international research incentives that are based on external interests an outsize role (Chapter 5). Chapter 6 is focusing on the capacity building part of the project. The goal was to collaboratively define target indicators, institutionalize data collection and to develop a common data framework. This chapter, therefore, shows the role that data accessibility, capacity and infrastructure in administrative offices play in implementing institutional strategies to become a research-led university.

In chapter 7, the authors discuss the strategies and chances for higher education systems, institutions and individual scholars to enter global research networks and increase their visibility. They suggest that national policy-makers and institutional leaders should facilitate doctoral and postdoctoral research stays at prestigious universities abroad for individual researchers in order to foster long-term international collaboration in research and publishing. International donors should also support research networks in addition to funding institutions and individuals. The Herana project itself is a good example of a research network that produces internationally visible high level as well as locally relevant research. The book concludes with the academic core profiles of the eight African universities researched.

What development is needed?

The book, unfortunately, does not offer a conceptualization or definition of national (economic) development itself, while this concept is the origin of a renewed interest of international and national actors in a marketized version of higher education. It is this marketization that led many African universities to commercialize teaching and exacerbate the de-emphasization of research.  The strength of the book, however, is that it presents the result of a higher education research and development project focused on the role of higher education research in development. It is, therefore, an insightful read not only for higher education researchers but also for policy-makers and university administrators in African countries, international development agencies and representatives of donor countries. It offers evidence where oftentimes assumptions dominate. Future research based on this publication should reflect on the opportunities and challenges of the primacy of data and the dynamics of development discourse, marketization and governance by numbers in African higher education.

Akiiki Babyesiza is an independent researcher in the field of higher education studies. Trained at the University of Cologne (African Studies) and the University of Kassel (Sociology of Higher Education), she has been conducting higher education research projects at the Bayreuth International Graduate School of African Studies (BIGSAS), the Robert Bosch Academy and CHE Consult – Centre for Higher Education. Contact: Akiiki.Babyesiza@online.de or visit https://akiiki-babyesiza.de/

When entering the debate about North-South research collaborations, I quickly became aware of the fact that such relationships with African partners are often situated in at least two different fields: In the scientific community and in the development politics community. What does this difference imply for assessing North-South research collaborations?

On the one hand, partners with strong research interests mostly want to cooperate on specific scientific problems without regard for national borders. The socialization as scientists very often includes such a cosmopolitan outlook. Only curiosity for the solutions of challenges and puzzles is said to contribute to the driving of science and their expected innovative output for the building of theories. Such “blue sky” science is supported by different organizations such as the German Science Foundation and science academies as lobbying groups. The following introductory remark to a study by the Dutch Royal Academy of Science (KNAW) illustrates this perspective in a nutshell:

“(I)t is crucial for researchers to be able to work and cooperate freely and independently, without ulterior political or commercial motives. If that is not possible, we should probably conclude that it is better not to join forces.” (Hans Clevers, President of KNAW, 2014)

On the other hand, the explicit engagement of researchers with commercial and political actors is nothing new to science either. Captured in the differentiation of ‘applied’ vs ‘basic’ science, researchers engage with daily and local problems to generate solutions that matter in their respective societies and beyond. The story of chemistry and physics since the 19th century is replete with examples of crossing borders between industry and research centres. This story is also replete with commercial competition.

Research outputs are then expected to lead among other to patents, as usually seen in the life and engineering sciences. But also politicians want immediate public impact of research – often expressed as “value for taxpayer’s money” – to legitimize the education and research budget. References to national interest, the building and maintenance of innovative capacities to be competitive in the market appear in numerous policy papers of this field. Science is supposed to be useful to many players.

Research is even more expected to lead to innovations that eventually contribute to the general welfare of the targeted society. Examples such as multi-donor multi-national collaborations in the trials of vaccines against infectious diseases are a point in case (see for example the EDCTP). Scientists linking research to development in African contexts also become part of the overall development discourse with all its promises and pitfalls. The aforementioned “knowledge-bases societies”-paradigm requests researchers and others to support scientific institutions and processes also in African countries to guarantee that they “catch up” with the research systems of Western/Northern states. Science becomes the object and subject of intervention.

Numerous funders and policy-makers have established initiatives to meet the expectations of supporting innovation and scientific systems of developing countries, which have yet insufficient research infrastructures. Capacity-building, for individuals, research organisations and polities, has become a key target in funding research collaborations. Trained scientists add to the capabilities of nations with their new technical, administrative and socially intercultural tested skills. Funders support organisations in the building of administrative capacities, for example to processing large amount of funds. Such theories of change have also become elements of research collaborations that seek to promote sustainable development, not only in the health and agriculture sectors. Each collaborative research project, therefore, has multiple dimensions, which go beyond the basic vs applied boundaries within science.

Moreover, the literature on scientific collaborations reveals that science has had a strong applied character in developing countries. Besides the capacity building, researchers from the South have long criticized that Northern partner were not very keen to respond to local needs and to apply their methods to develop local solutions in their collaborations. Sometimes, Southern partners emphasize more often the “third mission” of universities, that means the community outreach alongside teaching and research. Community-Based Participatory Research (CBPR) is one example of such an approach, especially in the field of health. Each partner of collaborative projects therefore needs to ask for an equal agenda-setting and agreement about the challenges or puzzles to be tackled together. Of course, this should not be restricted to African contexts alone.

There are several precepts and criteria available for assessing the equality and sustainability of research cooperation along these lines: The Commission for Research Partnerships with Developing Countries in as early as 1998 developed a set of criteria along which to establish and enable fair research partnerships, which satisfy the needs of both sides. The Research Fairness Initiative is another attempt to contribute to “measures to create trusting, lasting, transparent and effective partnerships in research and innovation” in the field of health. I will dedicate further blog entries on this issue.